You are here: Home / Uncategorized / Bows

This morning I busted out the plethora of hair bows stashed away in Savannah’s sock drawer. Most of them have never been worn, a combination of my indifference towards all things girly and SJ’s refusal to have anything other than her spaghetti-coated hands touch her head. They’re cute though, don’t get me wrong, and although I don’t harbor it, I can understand the urge to parade one’s daughter around in them.

Today, however, in a fleeting, unexpected moment of femininity, I decided to put a small, powder pink bow in the little stinker’s hair. After pulling back her bangs and clipping them into place, I waited for the inevitable “what the hell have you done to me?” look, followed by the signature grab, pull, and “anti-bow” toss. Surprisingly, it didn’t come. Instead, the bow fell out on it’s own.

Some things just aren’t meant to be.

But what a shame to let all those bows go to waste, such thoughtful gifts from friends, family members, and grandmas. Not yet ready to admit defeat, I considered my options and quickly came up with a solution. Savannah’s hair may have been too fine, but Daddy’s hair was dark, thick and full.

Sometimes the greatest ideas take time to develop, but sometimes they come suddenly, like a giant crack of thunder in the middle of an otherwise silent storm.

So Savannah and I worked our magic, covering Daddy’s head with pink bows, purple bows, yellow bows, silk ribbons covered in polka dots, checkered headbands and jewel-encrusted flowers. Even the dog got bedazzled. As expected, Geoff was a good sport, taking the abuse in stride. The beauty in all of this (besides the new ‘do, of course) is that in the last eleven months, his life has been, and will forever be, taken over by females. The same guy who can’t talk about menstruation without gagging now has a daughter to raise, and that’s wonderfully hilarious. Today it’s bows, tomorrow it’s tea parties. In sixteen years it will be prom dresses and break-ups.

But Daddy’s in it for the long haul, and I know he wouldn’t have it any other way. This morning, sitting on the living room floor surrounded by baby dolls and Dora DVDs, he smiled contently as rainbow pony vomited all over his otherwise untouchable head of hair.

If that’s not love, I don’t know what is. 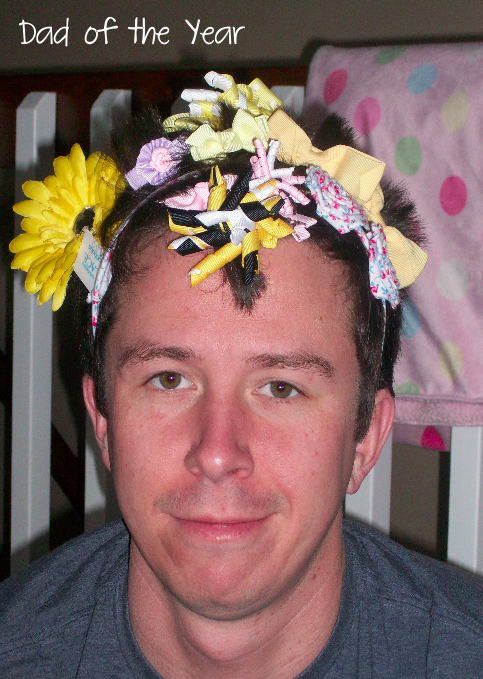